As an increasingly large number of surgeries have shifted (and continue to shift) away from the traditional hospital inpatient setting due to advances in technology and surgical techniques, determining total cost savings becomes paramount to understanding the benefit of shifting surgeries to this setting. Payors are also increasingly adopting delivery of surgical treatment in these settings. Notably the largest payor CMS has proposed removing 300 musculoskeletal-related services from the Medicare Inpatient-only (IPO) list in the next three years, including 266 in the fiscal year 2021 proposed payment rule. More broadly, CMS intends to completely phase out the Medicare IPO list by calendar year 2024. CMS added TKAs (CPT 27447) to the list of ASC-payable services in 2020, and has proposed adding THAs (CPT 27130) and 10 other procedures to the list of covered services in their proposed payment rule for 2021.

As organizations shift more rapidly toward this care setting, a trend that has been accelerated by COVID-19 and perceived safety by patients undergoing treatment, studies show that procedures performed in ASCs enable patients to be discharged home more quickly while reducing organizational expenditures by between 17% to 43% (according to a study performed by Fabricant et al., (2014) see Figure 1). On average, we find that ambulatory surgical centers (ASCs) perform 4,927 cases per year (source: authors analysis of Definitive Healthcare data). Given that the average cost of performing an orthopaedic surgery ranges from $30,000 to $50,000, and the average percentage savings is as discussed above, this would lead to average yearly savings of anywhere from $25 million to $106 million.

While patient selection is a critical decision to realize such results, let’s take a deeper look at the reduced cost offset against decreased reimbursement in an ASC when compared to a hospital inpatient setting. 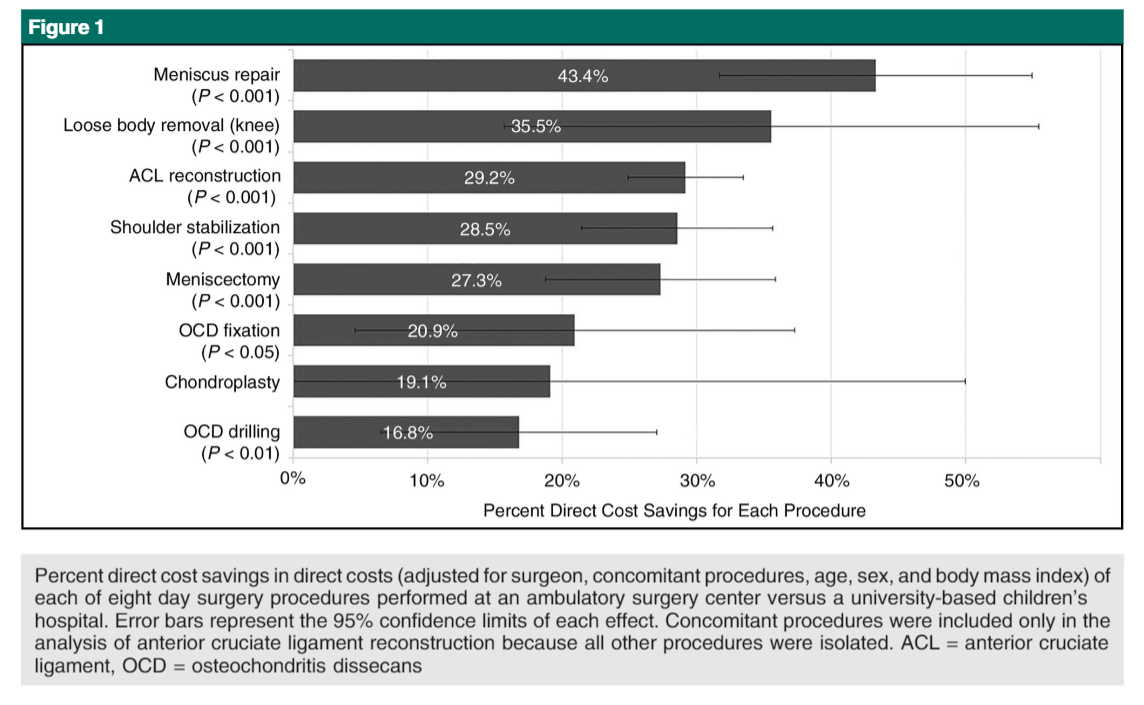 Given that an orthopaedic surgeon’s time is expensive and tends to represent the most expensive component of the surgery, these savings are significant. Such savings are not the only benefit for those involved. From a patient perspective, they spend less time in the operating room, have a shorter stay / visit at an ASC, and can return home more quickly than receiving the same surgery in a hospital environment.

2. Materials (20% of cost savings) In addition to the time saved, performing surgical procedures in an ASC also saves organizations money in terms of materials. Given cases that are best suited for treatment in an ASC are typically the least complicated, few additional supplies are necessary for each procedure. Munnich and Parente (2014) also note that ASCs are typically smaller facilities, requiring less overhead due to proximity to different areas of the facility (e.g. the operating room is typically much closer to the postoperative care units).

When it comes to unit costs, care performed in ASCs can lead to decreased supply costs, as more consistent core care teams can streamline the supplies they use while reducing excess waste. In practice, more predictable staffing due to less rotation of clinical support staff enables the utilization of fewer supplies as well. With fewer clinicians working in the same setting, ASCs have the opportunity to develop close relationships with medical device suppliers, resulting in procurement savings.

While more complex surgical cases often require hospitalization and added monitoring, improvements in surgical techniques have enabled exponential growth in the delivery of routine surgeries at ASCs. As payors increasingly reimburse for procedures performed in this setting, clinicians and administrators alike would benefit from a thorough understanding of the unit economics of their services. Avant-garde believes that the adoption of Time-Driven Activity-Based Costing (TDABC) is fundamental in measuring outcomes and costs of discrete procedures performed in an ASC. This will unlock an organization’s ability to distinguish themselves from their peers when speaking with payors and self-insured employers alike, and position themselves to thrive in this new environment.

COVID-19 and the Rise of Telehealth in Orthopaedic Care

We provide a current assessment of the literature on the provision of care during the COVID-19 pandemic, with an emphasis on the incorporation of telehealth into orthopedic care.